Want to learn more about your favorite performer?  Visit their links below.

Albannach is Scots-Gaelic for “Scottish” or “Scotsman.”  Albannach is comprised of two Scotsmen and one Scottish lass, all born and bred in Scotland! Plus one American-born Scot and an Irishman.  Their main purpose in life is to share their intriguing culture, history and heritage with you by means of their music.  HUGELY popular, their unmistakable drumming & didgeridoo bring you immediately to the stage when they perform!

The Dublin City Ramblers have thrilled audiences worldwide with their unique blend of Ballads, Folk, Humor, Wit and foot-tapping music. Their impressive career has spanned more than 35 years, with over 30 albums, top ten hits, several awards for best Ballad/Folk Group and, to top it all off, 8 Gold Albums. It is certainly no wonder that they are classed as Ireland’s Number One Group!

Jamison is a high-energy six-piece band from Philadelphia, PA that that can take traditional Irish tunes and turn them upside down, blending in rock, reggae, modern pop, and hip-hop along the way. Crowds can’t help but get to their feet as Jamison takes Irish music to the next level with original songs and eccentric versions of covers or festival favorites.  You’ll be drawn into a unique experience with the band’s contagious good vibes.

La Unica (pronounced “La-Ooh-Knee-Ka”) is a Washington, DC based band who’ve been bringing their “Irish Latin Rock” sound to audiences for 13 years.

In a style all their own, La Unica’s five musicians seamlessly harness sounds from Latin America and Ireland to create a patented “Irish Latin Rock” musical experience.  La Unica plays a mix of original creations and familiar-sounding cover songs which are sung in both English and Spanish, appealing to, well, everyone!  La Unica offers a truly original sound and provides a high-energy show which gets even the shyest of guests dancing and excited to party.

Seven Nations is not your father’s Celtic band. With a passionate, tender, and rollicking style that winningly veers from roots and folk to dance and fusion-rock, Seven Nations has earned a growing reputation as an adventurous band with a charismatic stage presence. Their instrumentation, and bagpipes and fiddle mostly, give them a distinctive sound and that’s what makes them different. 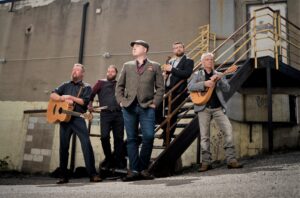 The Steel City Rovers — an highly active touring band — headlines large festival stages performing dynamic and expressive music that is a unique composite of traditional Celtic music and North American styles including bluegrass, folk and roots. The Rovers stand out for their powerful, emotive vocals and engaging entertainment. They create, collaborate and work hard to further the love and awareness of music.

SYR (pronounced sire) is a Celtic Folk Rock band from Columbia, SC. Taking inspiration from Celtic history, stories and myth, SYR creates powerful songs with themes of battle, love and victory, celebrating the rich heritage of the Celtic Nations in a contemporary style with broad audience appeal. SYR’s reputation for a high-energy performance has made them a popular attraction for many Celtic festivals and events.

Blue Lotus World Dance Company is a performance group that showcases various World Dance Styles such as Folkloric and American Cabaret styles of Bellydance. Bellydance and other world dance styles are a celebration of the human spirit. This style of dance knows no age or size. The dance empowers women by nurturing their minds, body, and spirit. Blue Lotus welcomes you to join us in the feminine divine of Middle Eastern and World Dance Styles.

Zach is an excellent host and skilled entertainer, bringing warmth, charm, and lighthearted humor to every performance. Based out Orlando FL, Zach has been singing/playing guitar professionally since 2002. Zach is an outstanding talent, a virtuoso on guitar and an outstanding writer…and super funny!  He’s a must see!

The First Coast Highlanders, formed in 2016, is a Scottish Highland Bagpipe and Drum band based outside of Jacksonville in Clay County, Florida. They are a performance and entertainment bagpipe band, a teaching organization, and a non-profit cultural group. They promote Celtic culture through music with the to support the Celtic culture in the community by providing instruction to anyone interested in learning the Great Highland Bagpipes and Scottish Drums.

John Miles is a retired US Marine Corps Officer and former college professor that presents lectures to multiple Scottish Highland Games and Celtic Festivals throughout the country. John is a six-time published author in Marine Corps Gazette, the professional journal of the Marine Corps. Additionally, his articles have been published by the journal Scot’s Heritage Magazine, the magazine Pipes & Drums, the webpage of History Scotland, the periodicals American Frontiersman, and Military History magazine as well as the journal The Highlander. His topics this year will be “The Loch Ness Monster” and “Did Henry Sinclair of Scotland Discover America?”

Captain William Mayhem, a.k.a. Bill McRea, has a 40 year history in the entertainment world, performing as a magician and comedian for well over 7000 appearances, performances and presentations around the world. Over a dozen years of his career was while he traveled the world with the United States Air Force. His talents as a magician have been utilized in motivational speaking programs, television commercials, theater productions, corporate training videos, anti-gang/drug seminars and safety programs. Relocating to his hometown of St Augustine Fl, in January 2007, he has taken his passion of magic and love of pirate lore and history and blended them together into William Mayhem THE Pirate Magician of St Augustine.

The Steel City Rovers — an highly active touring band — headlines large festival stages performing dynamic and expressive music that is a unique composite of traditional Celtic music and North American styles including bluegrass, folk and roots. The Rovers stand out for their powerful, emotive vocals and engaging entertainment. They create, collaborate and work hard to further the love and awareness of music. 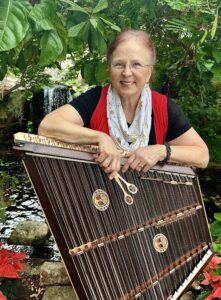 Mickey Sweeney met her first hammered dulcimer in St. Augustine six years ago; it was love at first sight! Since then, she has studied with many renowned performers and won third place at the National Hammered Dulcimer Competition in 2022. Mickey performs regularly at the Butterfly House in Chesterfield, MO and often in the St Louis area. She is delighted to perform for the first time at the Celtic & Heritage Festival; you can look forward to hearing some old favorites as well as newer tunes.